We always welcome your questions and comments! However, before contacting us with a question, please see the FAQs below as your question may have already been answered therein.

"No laminates, no laminates!" Now you offer a laminate model. Why?

The worldwide economic conditions during the last seven years placed the Solid Wood model out of reach for some aspiring jazz guitarists.  The laminate model isn’t a change, but rather a response to the strong demand for a mid level model that had the same great looks, same “plays like butter” neck, beautiful neck and head stock appointments – at an extremely affordable pricing structure that is commensurate with the lesser cost of raw materials.

Do you ship outside the USA?

Due to our shipping volume, FedEx provides us with preferential shipping rates. In our experience, Fedex is also the most reliable, and most importantly, “damage free” shipping service worldwide. We extend those highly discounted rates to our international patrons at great savings.  For a custom deeply discounted FedEx shipping quote, please click here. EMS shipping is also available for some countries.  We will provide you with the best shipping option for your location.

Where are Conti Guitars made?

Short answer: Conti Guitars are not made in any single factory location.

In 2008, after the superb results of a one year evaluation of the first generation Conti Archtop, Robert commissioned Peerless Guitars (considered by several major brands as absolutely the highest quality OEM in South Korea) to manufacture the first generation of Conti Guitars to his specs. Those guitars entered into global circulation in the late spring of 2009.  As evidenced by numerous user photos and written commentaries, the Conti Equity Edition was well received by the jazz guitar community.  In an effort to bring the Conti Equity Model to the consumer at a price under $2,000.00, Robert committed to a large production volume of instruments, as that business decision served to offset the continually rising cost of raw materials for the duration of the first production run. The last guitars of the first generation instruments were all acquired by owners in the mid part of 2015. 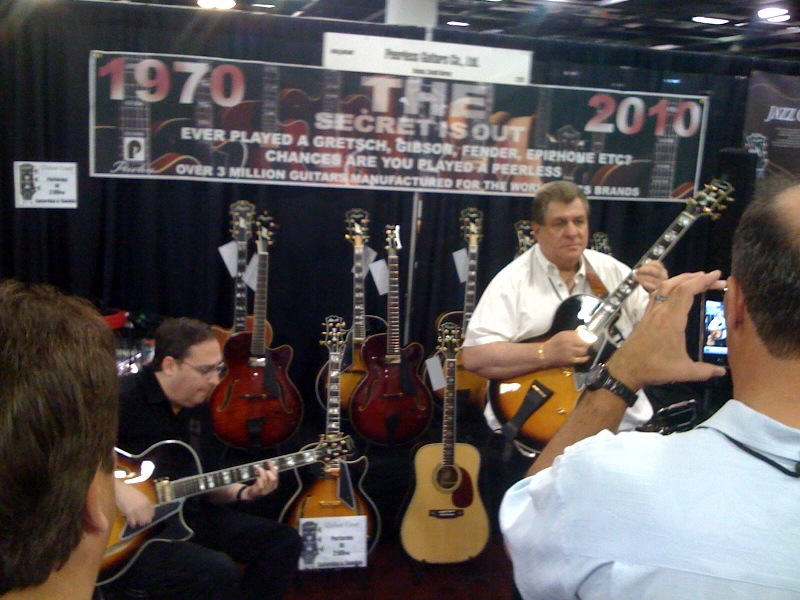 This photo was taken at the 2010 International NAMM Expo. As indicated on the banner at the rear of the booth, since 1975, the Peerless Guitars has manufactured high quality guitars for just about every major brand name manufacturer.
Second Generation

In late 2015, Robert was once again faced with the task of addressing many requests for design additions and other specifications. In an ongoing commitment to offer high quality guitars to consumers at affordable prices, it is imperative for a successful manufacturer to stay abreast of the continuously changing costs of labor and raw materials in various international manufacturing sectors.

After finalizing the new model designs, Robert entered into seemingly endless negotiations, as the manufacturing environment had changed substantially since 2007-08, prior to the production of the first generation Conti Guitars. More specifically, during that period of time, many major brands either bought the best foreign factories, or in lieu of purchasing a factory, they simply bought the entire annual production capacity of a factory.

In our continuous effort to produce a high quality instrument, at a competitive price point, we must acquire the highest quality components available from skilled artisans in every corner of the world. Unfinished Necks (Eastern Europe), UK, Japan (Gotoh hardware), the world’s best Ebony comes from Cameroon & India, unfinished bodies (South Korea), Vermont, USA. To answer your question, there is no single country where our guitars are “made,” as finishing and quality control transpires here in the United States.

A few years ago Robert instituted a policy wherein we do not disclose the names of our private OEM builders. Reason #1: they prefer the steady employment we offer rather than dealing with the public. Reason #2: in 2017, an unscrupulous dentist in New Jersey, copied Robert’s design and specs, then he attempted to have our builders make the guitar for him at a cheap price. As he was unsuccessful in that attempt, he apparently found some Chinese factory to build him a cheap copy. While unwrapping the shipping carton, he then had the audacity to post a video on Youtube, clearly stating something to the effect of: “I finally got my Conti Guitar with a Gibson name on the headstock!” (see video below, which was archived from Youtube for evidence):

A reading of our Conti Guitar Owner Comments/Photos will demonstrate that we provide high quality instruments at affordable pricing, with some owners having acquired two, and even three Conti Guitars over the years. Additionally, there are over 4,800 stellar patron commentaries as to the super high quality products (learning resources, lessons and guitars) produced by Robert Conti.

Why are Conti Guitars so affordably priced?

From its inception, our mission was to provide a high quality archtop to worldwide patrons of our learning resources at a price that most everyone could afford.  When you purchase directly from the manufacturer, you “cut out the middlemen” and save hundreds and hundreds of dollars in unnecessary markup.  If our guitars were offered through the typical distributor/dealer network, final pricing to the consumer would be at least three times higher.

No distributors, no dealers – direct from us to you.

Additionally, we are able to maintain pre-shipping quality control on every guitar. Final inspection and set-up is completed seasoned luthiers – and you can rest assured of quality, as the Conti brand name is on the head stock, and no guitar is shipped until Robert signs off on the instrument.

Is there a hard shell case available?

Although the vast majority of our owners prefer a gig bag for comfort and ease of handling, we do offer a hard shell case upgrade option for $134.90 that you can select when ordering your new Conti Guitar.

What kind of strings are installed on Conti Guitars?

All Conti Guitars are set up with Conti Preferred Gauge Strings which are round wound strings in the gauges 11-14-20 (wound)-28-38-48.

Can I have my choice of strings installed?

Yes, you may ship a set of your favorite strings to us and our technician will install them during his setup and final inspection of your Conti Guitar.

What kind of pick does Robert use?

Not so much related to the guitar itself, but still a frequently asked question.  No matter the playing situation, Robert always uses the Dunlop .38mm Nylon Pick. For an in depth explanation for the reasons why, see The Precision Technique in the Source Code DVD Series.

Will I really receive a video of Robert Conti playing my actual guitar?

Yes! As part of our first class service, and in an effort to ease any worries about ordering a guitar via the internet, we provide all new owners with a video of Robert Conti playing and introducing you to your new guitar. Acquiring a Conti Guitar is a truly personalized experience we believe you won’t experience anywhere else.

Toll Free in the USA

On the bottom right side of your web browser, if you see the chat icon indicating that we are online, feel free to start a chat and we’ll be happy to assist you with your needs.